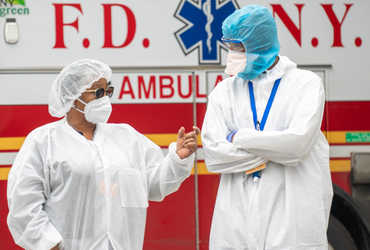 A historic corona vaccination program has begun worldwide, including in the United States and Britain. Governments of various countries are approving the immediate use of vaccines one by one, including Pfizer, Modern. On the other hand, in the United States, the corona epidemic has erupted once again, with four million new cases of corona and more than 2,500 deaths in a single day. A new form of corona has also surfaced in Britain and the government has announced that the corona has become uncontrollable. Corona’s daily affairs have also recorded Japan’s levels in South Korea and Asia.

According to the CDC’s new guidelines, people who have a severe reaction to the corona vaccine should not be given a second dose of the vaccine. The United States has also approved the modern vaccine after Pfizer for immediate use. The world’s first corona vaccination program was launched in Britain. Since then, other countries including the United States have approved the Pfizer vaccine. Now Israel has also started a vaccination program. Israeli Prime Minister Benjamin Netanyahu was the first to receive the vaccine.

On the other hand the corona epidemic is increasing in Europe. Britain’s Health Minister Matt Hancock admitted on Sunday that coronary heart disease was prevalent in the country. Just hours before the health minister’s statement, the fourth round of mass lockdowns in London and south-east England after Prime Minister Boris Jones canceled a new type of corona in Britain and a proposed five-day ‘Christmas bubble’ event Announced. The situation in the country is extremely difficult, Hancock said. The best gift you can give at Christmas is to stay home and not spread the virus. Following the announcement of a harsh lockout by the Prime Minister, people fled to London. As the Corona case rose in Britain, other European countries banned all flights from England. According to the WorldOmiter website, the total number of corona cases in the UK has risen to 20,09,613 and the death toll has risen to 2,08.

The British Ministry of Health has warned that a new type of corona has been found in the country. This new strain of virus spreads 30 percent more rapidly than the original corona virus. Scientists say it can take a few weeks to understand the new nature of the virus, which can lead to serious illness and how dangerous it is for efforts to develop immunity.