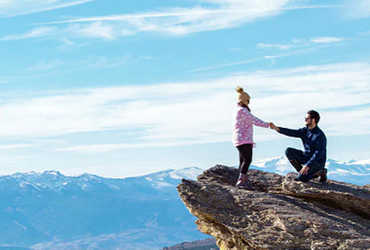 Vienna, Ta. 2
A strange tragedy occurred in the Falkert hills of Austria. The lover proposed the girlfriend in a beautiful, romantic atmosphere while he went trekking in the hills of Falkert. The girlfriend was so excited by the proposal that she slipped and fell into the valley.
An 8-year-old boyfriend proposed to his 8-year-old girlfriend in a beautiful setting on the 40-foot-high hills of Falkert. In response to the proposal, the girlfriend immediately said yes and she jumped with joy. The accident took place on the top of the hill. There was a deep valley below. The extroverted girlfriend’s leg slipped and she slipped into the valley.
A very emotional and filmy scene was made while diving into the valley. Her lover caught her on the edge of the valley, but was unable to stay in that position for long. In an instant, the incident happened in two moments, even as the girlfriend was falling down, with tears in her eyes, she said to her boyfriend in an emotional tone: Yes, I will marry you. This caused her to fall into a deep abyss.
But the power of love kept him alive. Due to the recent snowfall, there was snowfall all around. The girl survived the accident. He suffered injuries to his arms, legs and groin, but survived. Her lover arriving in the valley behind her was also injured. He fell from a height of 20 feet when he ran for his life, but the power of love miraculously saved them both. The marriage proposal seemed to give both of them the vitality to be in any situation with each other.
Other tourists may have seen the scene from a distance. One of them called the emergency services for help. Eventually both were brought by helicopter to the deep valley. The rescue officer said that the young man and woman are indeed very lucky. Surviving even after falling from such a height is a big miracle.
Officials said the condition was out of danger as both were treated immediately. The incident became very controversial in Austia.