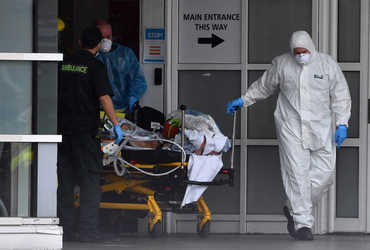 With the discovery of two new strains of Corona’s heirs, there is renewed concern in the world, including Britain. According to Britain’s Health Minister, 744 people died of the corona virus on Wednesday. For the first time since last April, so many people have died in a single day. The death toll from the Corona virus in Britain has risen to 69,157. So 21 lakh 51 thousand people have been infected with Corona.

John Nekengsang, president of the Center for Disease Control and Prevention in Africa, told a news conference on Thursday that a new version of the corona virus may have originated in Nigeria. However, there is still a long way to go. A research paper claims that on August 3 and October 9, a new strain of the virus was present in a sample of patients in Nigeria.

Many countries are imposing an air ban on the new Corona in Britain. Which now includes China and Canada. Both countries have also banned flights to and from the UK. Therefore, the corona virus is on the rise in California, USA. The number of corona virus patients in California has crossed 2 million.