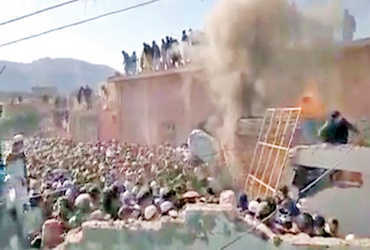 Atrocities on Hindu minorities are increasing in Pakistan. Hindu temples and monasteries have long been targeted. On Wednesday, another Hindu temple was vandalized and set on fire in a village called Terry in Khyber-Pakhtunkhwa province. The police took note of the incident but did not register a complaint nor take action against anyone.

According to local police, the old temple was undergoing repair work. The locals did not like the development of the temple, so this step is likely to be taken. After a video of the incident went viral, public outrage erupted on social media. People criticized the Indian government for being completely silent on this issue.

Pakistani journalist Mubashir Zaidi posted a video on social media saying that the temple was vandalized by local activists to prevent it from being built despite permission. In the video, a large number of people are seen smashing the temple. Local minority leaders and human rights activists urged the authorities to take strict action on the issue.