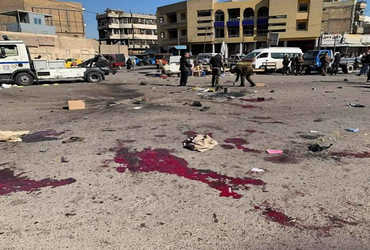 A bomb blast near Iraq’s capital Baghdad killed at least 32 people and injured 110 others, the deadliest in three years. The explosion occurred at an old clothing market on the city’s Tyran Square.

The bomb exploded in front of a crowd of mourners shortly after. He blew himself up as the crowd gathered around him. After the explosion, blood stains and clothes were scattered on the road.

No terrorist group has claimed responsibility yet

However, no terrorist group has yet claimed responsibility for the attack. The number of suicide blasts in the Iraqi capital has decreased dramatically since the defeat of the Islamic State in 2017. Let us know that the last tragedy happened in the month of January 2018.