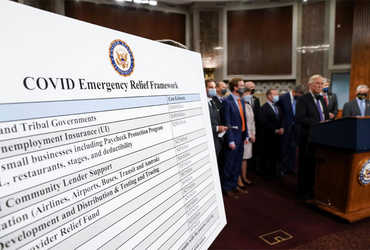 The House of Representatives of America and the two houses of the White House have given a large package of 8 908 billion to give seats to the United States. This amount will be used for unemployment allowance, relief to various industries, help in rent, food assistant, transport relief, education, help in health care sector etc. The basic objective is to increase the amount of cash in the hands of the people and to meet their daily needs.

Negotiations have been going on for months in both the US House of Representatives and the White House, but no agreement has been reached. The package has now been prepared on a priority basis and will be introduced in Parliament in the coming days. If the amount of 900 billion is converted into rupees, then today’s rate will be more than 66500 billion.

The package is part of the previously announced 4 1.4 trillion package, but will now be implemented. Under the new package, unemployed Americans will receive checks ranging from 300 300 to 11 600 per week for 11 weeks. However, it is feared that ordinary citizens will not get enough help from this amount.