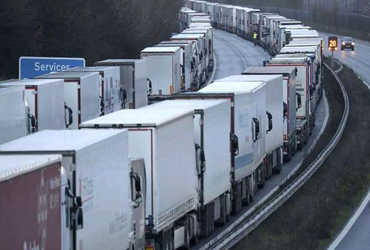 Forty countries including India have banned flights from Britain after a new strain of corona virus in Britain. That is why Britain is now alone in the world. The most effect is being done by the sanctions imposed by France. More than 1,500 trucks are parked on the English border to fly to France. It is believed that food shortages in Britain could increase if restrictions are not relaxed.

On the other hand, British President Boris Johnson has held talks with French President Emmanuel Macron to ease the restrictions imposed by France. Scotland has also closed its borders with Britain and imposed air restrictions. So for the last 48 hours France has stopped all types of road, railway, air service with Britain. Germany has banned access to Britain as well as South Africa by 6 January. Spain and Portugal have also imposed air restrictions. Spain is allowing its citizens to return from Britain. W

A large proportion of Polish citizens live in Britain. It has also banned all flights from there. Therefore, people from Britain are being sent to quarantine in all countries. The quarantine period has also been extended. Hence the continuing debate between Britain and France. An important announcement can be made on Wednesday.

An option is also being considered to allow drivers of trucks parked to go to France to undergo the Corona trial. However, this may take up to 24 to 48 hours. So after the travel ban in Britain, there is anarchy in Turkish supermarkets. A large number of people have gone to Turkey to buy toilet paper, bread and vegetables.