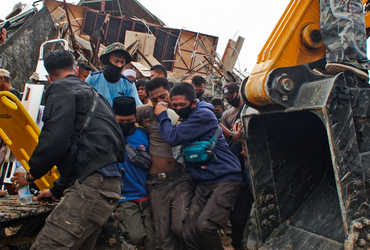 Jakarta, ta. 13
The quake was the epicenter beneath the Pacific Ocean floor, however, no tsunami warning was issued. The earthquake measuring 7.5 on the Richter scale killed at least six people and injured 200 others. More than 200 houses and buildings were damaged and 15,000 homeless people were placed in shelters.
A powerful earthquake shook the Indonesian island of Sulawesi. Hundreds of people were injured and an immediate rescue operation was launched. Millions of people spent the night amid fears of electricity theft in many homes. According to the rescue agency, the process of moving the debris is underway and it is still possible that people may be trapped under the debris.
The epicenter of the earthquake was 18 km in Mamuzu district of Sulawesi province. Was reported in depth. The government also warned the people of the coastal region to be on high alert following the possibility of a tsunami following a powerful earthquake. Even after the earthquake, people felt mild tremors in and around Sulawesi Province, Indonesia. People who had cracks in their houses spent the night on the streets in fear.
According to the government’s emergency department, in addition to 200 homes, two hotels were also damaged in the earthquake. In addition, the local governor’s office and hospital were damaged and work stopped. The earthquake also caused landslides in many places. Government officials have said that some people may be injured.
Indonesian President Joko Widodo gave a nationwide speech on television expressing his condolences to the families of the victims. He said that the government would provide relief to all the victims.