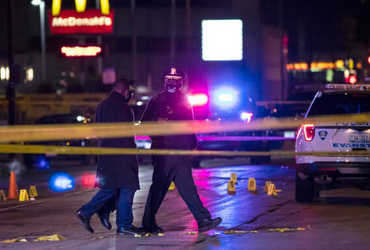 Inside Chicago, America, freak individuals have fired indiscriminately. Three people have been killed and four others injured in a Kerala shooting by a mob in the South Side. Police have since confronted and killed the attacker. A 30-year-old Chicago student was shot with a gun. He was sitting inside his car in a parking garage in Hyde Park at the time of the incident.

Attacker Jason Nightingale, 32, entered an apartment and shot a 46-year-old security guard. Later, a 77-year-old woman was also shot. Fortunately the woman survived but the security guard was killed. The woman is undergoing treatment in the hospital. From there, he took a gun and car from a man and went to the shop and opened fire. In which a 20-year-old man has died. So the 81-year-old woman is seriously injured.

They also shot a 15-year-old girl sitting outside the shop, whose condition is now critical. He then went inside the shop, where the officers had come, then opened fire on the officers. However, no officer was injured. From there he went to the Valley store in the Evanston area and also shot there.

By the time he left, the police had arrived. The attacker was surrounded in the parking lot and surrounded.