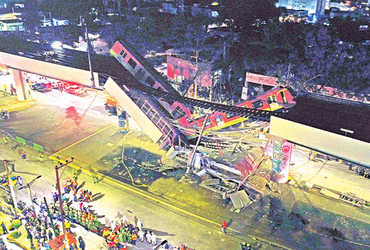 – Seven of the injured are serious: many cars parked under the bridge are also feared to be crushed

Mexico City: At least four people died after being hit by a metro train in Mexico City, Mexico’s capital. The overpass bridge collapsed, leaving the train compartment hanging in the air. Forty people have also been injured in the accident. The condition of some of them is stated to be critical.

Currently, debris removal work is going on at the scene. It is suspected that some people were still trapped in the rubble. Efforts are on to find them. A car has also been found in the wreck.

The bridge suddenly collapsed and the cars parked below it were also uprooted. Efforts are on to save the survivors of the debris.

It is unknown at this time what he will do after leaving the post.

Children were also among those killed in the incident. The bridge was 12 feet (5 m) high from the road. The accident happened so fast that people did not get a chance to escape.

Seven of the injured are in critical condition and have undergone surgery. The tragedy in Mexico comes at a time when the whole country is fighting with Corona.

After the accident, many questions have been raised about the strength of the metro and the overpass built for it. Mexico City Mayor Claudia Shinbaum said a total of eight people have been hospitalized.

According to Shinbaum, a motor cyclist has been safely evacuated from the scene. Many Mexican leaders have expressed regret over the incident. The accident occurred when the foundation of the bridge collapsed.