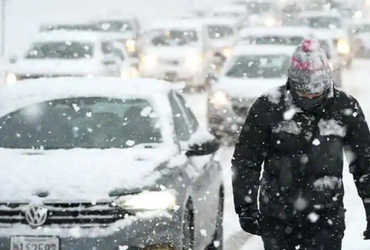 New York, Ta. 13
A blizzard is likely to hit the United States. Cold wires were blown from Virginia to New York. Extreme cold and snowfall is expected in at least 15 states.
According to the US Meteorological Agency’s National Weather Service, 12 states are prone to extreme cold and snow. The National Weather Service tweeted warning that cold winds began to run from Virginia to New York. More than 60 million people in the United States are expected to be affected by extreme cold.
According to the weather agency’s warning, not only is there a fear of snowfall, but blizzards can also strike this winter season. This may affect food and electricity supply. The weather agency also advised potential victims to take food as a precaution.
The US Meteorological Agency also advised citizens of 17 states not to travel unnecessarily. The agency said that travel should only be done when it is mandatory for a business or job. It is advisable not to travel to outlying states under any circumstances. Public transport can be forced to stop at any time if the weather changes. It is better not to go out for security reasons.