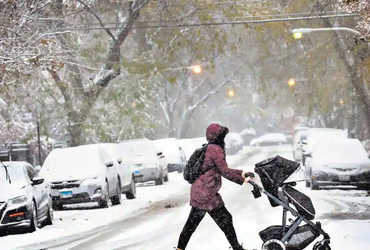 Austin, Ta. 21
Heavy snowfall is expected in Texas. National Weather Service officials warned that snow could fall from 15 to 18 inches (1 to 1.5 feet) in Texas. There are apprehensions that several roads may be blocked due to forecast of heavy snowfall.
The Oklahoma Center for the National Weather Service has forecast heavy snowfall in Texas. Snowfall had already started in the southwestern areas. This will cause heavy snowfall throughout Texas. Not only this, three to five inches of rain is also expected.
This will be the first heavy snowfall of the winter season. On New Year’s Eve, people choose to go out on public holidays, but the Meteorological Department warns them not to go out. In addition to snowfall, there is a possibility of rain and stormy winds. In addition to Texas, Louisiana, Mississippi is also expected to have icy winds.
A rainy season was formed in the coastal region of the Pacos River. The icy wind was blowing in this coastal region. Stormy winds will move in the Gulf of Mexico as the weather changes. The Meteorological Department official said that winds will move in the southwest at a speed of 15 to 215 km per hour.
The Texas governor called an emergency meeting of various agencies and directed them to be prepared for rescue. Governor Greg Abbott appealed to the people to get the things they need and stay home if possible. A team is also on standby for rescue if roads get blocked due to snowfall.