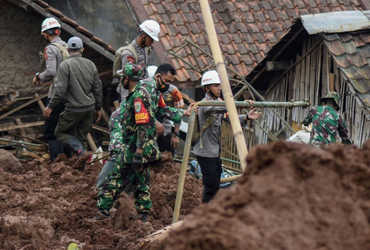 Heavy rains in Indonesia killed at least 11 people and injured 18 others after landslides hit two places. Rescue and relief workers were busy rescuing people stranded by landslides at Sihanjung village in Sumedang district of West Java on Saturday when another rock collapsed, said Raditya Jati, a spokesperson of the National Disaster Reduction Agency.

Some rescuers were also trapped in the accident. The rain stopped on Saturday night. Landslides caused blockages on bridges and roads. Authorities are trying to bring heavy equipment to clear the debris.

Recent monsoon rains and recent high tides in Indonesia have caused landslides at dozens of places. Extreme levels of flood hazard were announced in almost all parts of Indonesia. Millions of people live in mountainous areas in this country spread over 17,000 islands.